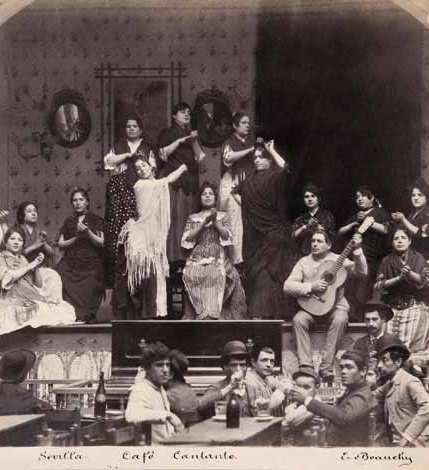 Flamenco may have its origin in Moorish Spain, as the modulations and melodies that characterise the flamenco genre may come from the Arabic monochord songs. There are also those who attribute the creation of this music to the gypsies, a people originally from India (until relatively recently they were believed to be Egyptians) and, due to their nomadic nature, now scattered throughout Europe. They settled in Spain in the early 15th century.

Nor can we forget the different musical legacies left by the Andalusian mourners in the south of Spain, where the psalmody and the Jewish musical system, the Ionian and Phrygian modes inspired by Byzantine singing, the ancient Hindu musical systems, the Moorish songs and the Mozarabic popular songs, from which the jarchas and zambras probably originated, had held sway. It is the result, therefore, of the mixture of all these races and cultures, but always with a folk origin. Flamenco emerges from the people themselves, has clear folklore roots and in the province of Seville has given rise to great artists throughout its history.

As for the term Flamenco, there are many theories, although perhaps the most widespread is the one defended by Blas Infante in his book Origins of Flamenco. According to the father of Andalusian autonomy, the word "flamenco" is derived from the Arabic terms Felah and Mengus, which together mean "wandering peasant". Another theory holds that the term comes from Flanders, since it was thought that the gypsies could be of Flemish origin.

Andalusia is the origin and centre of flamenco production and Seville holds a special position thanks to historical figures such as Tio Luis de la Juliana, el Planeta, el Fillo and Paco la Luz, among others. In the 19th century, flamenco arrived in cafés and taverns and popular figures began to emerge from this until then marginalised art form.

Besides great singers, dancers and players, Seville has contributed to the history of Flamenco with the soleá from Alcalá de Guadaíra, which arose in the caves at the foot of the castle, and the Sevillanas, which can be considered a kind of flamenco-style dance form.
The 20th century witnessed the consolidation and professionalisation of this musical style, with great masters such as Manolo Caracol, la Niña de los Peines, el Niño de Marchena, Juan Talega, Manuel Torres, Arturo and Tomás Pavón. All of them will play an important role in the history of this genre and will inspire future generations.

In the late 1990s and throughout the following decade, the Nuevos Medios record label launched many musicians under the Nuevo Flamenco label. This label has brought together artists of many different styles, including orchestrated flamenco performers, rock musicians, pop musicians, and Cuban musicians. Today flamenco is one of the world's major popular music styles, with the ability to influence many other types of music and great contemporary artists. In 2010 UNESCO recognised Flamenco as Intangible Cultural World Heritage.