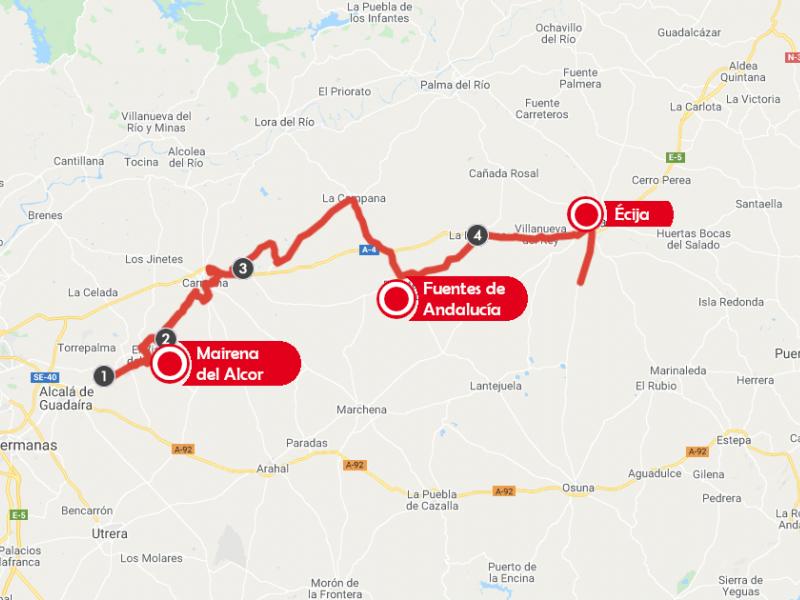 The IE-029 Campiña-Alcores de Sevilla equestrian route links these two geographical areas of the province of Seville via the River Corbones, with wide stretches suitable for horse-drawn carriages. It is a rich and extensive cereal-growing, olive-growing and livestock-raising area, located on the left bank of the River Guadalquivir, which is home to species of interest, such as steppe birds.

It is a territory that has historically been an area of passage and settlement for numerous cultures, as shown in its rich heritage of remarkable monuments, excellent archaeological sites, gastronomy, handicrafts and popular festivals. Traditionally, it has also been a land of horses, whether for their presence in farm works or in festivals, which has led to a great love for horses and the establishment of magnificent stud farms.

The route begins in the municipality of Mairena del Alcor, at the foot of the Castillo de Luna, where we can access through the Parque de los Molinos to the Greenway of Los Alcores, the old route of the "train of the bakers", from where we can see the cornice of the Alcores, a natural elevation of the land at the ends of which are the current towns of Carmona and Alcalá de Guadaíra. This section, most of which can be used by carriages, runs between the fertile lowlands and the escarpment. Once we leave the section of the Greenway, we reach the start of the next stage at Puerta de Sevilla, where we head towards the municipality of La Campana, first along the Cordel de la Campana and then along the Cañada Real (Royal Drove Road) for horse racing, crossing an extensive fertile plain and then entering an area of scrubland.

We will cross the River Corbones, a small detour and a small pass under the A-4 motorway will take us to the municipality of Fuentes de Andalucía. Livestock tracks and the old Camino de los Palos lead us to Écija, where the route ends among olive groves, cereal crops and a backdrop of windmills.

The comments are moderated, so it takes a while to appear. If they contain offensive language they will not be published.
Towns
Carmona
Écija
Fuentes de Andalucía
La Campana
La Luisiana
Mairena del Alcor