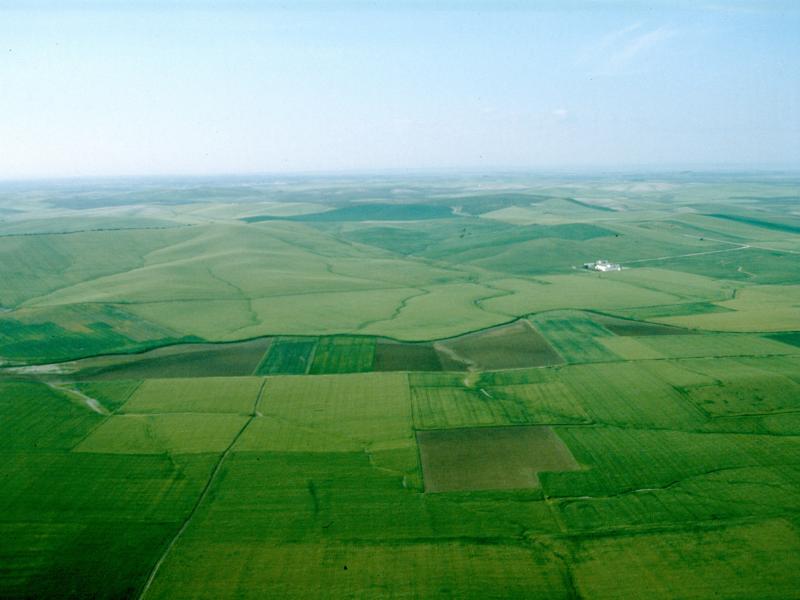 Nature in the heart of Seville

With gently rolling hills, the Sevillian Campiña (countryside) is made up of the middle and upper terraces of the Guadalquivir, the areas of contact with the Sub-Baetic system, the fertile plains of the River Guadiamar to the east and the River Genil to the west, and the Los Alcores platform, a 242 m hill that stands out for its altitude in the Guadalquivir Depression.

The heart of the province spreads out like an infinite fertile ocean. Croplands stretching out to the horizon with its magnificent sunsets. Wheat, cotton, corn, legumes, olive trees. The colour of the Campiña varies with the seasons, from the whole range of soil colours to intense greens and the yellow of the sunflowers or the white of the cotton. The traveller is always pleasantly surprised by the sea of gentle, rolling hills, worked by generations of Sevillian farmers and labourers who have shaped the landscape with their labours. The landscape of the Sevillian Campiña has been formed by a combination of nature and human activity.

Like the whole of the province, the Campiña is also very varied: large fields of crops that are home to diverse wildlife, dehesas, cattle trails and rivers.

The rivers Corbones and Guadaira, both tributaries of the Guadalquivir, cross the western part of the province, flowing into the Guadalquivir and creating a green corridor between the south and the centre of the province, and in some areas, wetlands. Both rivers are flanked by riverside vegetation, with ash trees, poplars, tamarisks, oleanders, wild roses, reeds, etc. The Corbones has its source in the Serranía de Ronda and crosses the great plains of the Campiña creating its own ecosystem. Some of the fish species it contains are barbels, bogues and carps. The Iberian roach (Rutilus alburnoides), a species endemic to the Iberian Peninsula, is seriously endangered, so part of the river has been proposed as a Site of Community Interest (SCI). In some stretches signs of otter activity have been found. The reptiles include the European pond turtle and the Mediterranean tree frog. In the La Puebla de Cazalla reservoir you can see egrets, coots, ducks, goldfinches, spoonbills, wood pigeons and some ospreys.

The Guadaira River has its source in the province of Cadiz (Pozo Amargo), near Moron de la Frontera, and runs through the towns of Arahal, Alcala de Guadaira, Dos Hermanas, Coria del Rio and Puebla del Rio, creating spectacular images that have inspired landscape designers and romantic travellers. The Prado Museum in Madrid is home to numerous landscapes of the Guadaira, with its mills and waterfalls and its lush riverside vegetation: poplars, tamarisks, willows, poplars, elms, ashes, eucalyptus, oleanders, Italian arum, reeds, rushes, wild roses, brambles, ivy, bindweed and hawthorn. In the Oromana Natural Park, in Alcalá de Guadaira, it flows through a forest of ancient pines.

The river contains an abundance of carps, barbels, bogues, eels, mosquitofish and shad, among others. The amphibians include the common frog, Mediterranian tree frog, common toad, natterjack toad and the European turtle. The birds to be found include the cattle egret, grey heron, owl, mallard, coot, reed warbler and black-winged stilt, among others. One section has been declared a the Riberas del Guadaira Natural Monument, from the Pelay-Correa mill to the Hundido mill at the junction of the Guadairilla stream and the River Guadaira. This section includes the Oromana Park and twelve flour mills of Moorish origin, including the Aceña, Algarrobo and Realaje Mills.

The dehesa is a clear example of nature shaped by human activity. The dehesas of Arenales, in Morón de la Frontera, and Montepalacio, in Paradas, are protected areas. Criss-crossed by streams, they are areas of agricultural and livestock production: cork oak, holm oak and pine trees are home to a great diversity of wildlife and vegetation and form a unique landscape. Rockroses, gorse and broom, among other scrub species, are a refuge for lizards, snakes, hoopoes, black storks, booted eagles, red kites, short-toed eagles, hedgehogs, hares, rabbits, partridges, foxes and genets. The Thymelaea lythroides shrub, endemic to the Ibero-North African region, can only be found in two areas of the Iberian Peninsula, one in the municipality of Velada in Toledo and the other in the dehesa of Montepalacios in Paradas.

The cattle tracks, which in the past were used by thousands of heads of cattle, are now natural trails, greenways or green corridors, a natural resource that allows us to discover all the natural wealth of the area on foot. Particularly noteworthy is the Mariserrana path in El Arahal, with groves of oaks, mastic trees, rockroses, kermes oaks and wild olive trees, among others.